“You’re the most paranoid person at Maxim!” Jack Gifford, Maxim’s CEO, told me one day. Then he paused for what seemed like an eternity.

Gifford looked at me and said, “And that’s good!”

Gifford built Maxim from $0 to $1B/Year using a combination of street smarts, team building (the talent level was off-the-charts), cutting edge marketing, and paranoia. Everything (and everyone) could be challenged.

Fast forward to when I started my company. Sid, one of our engineering directors who had worked with me at Maxim, said to me one day, “You’re not as paranoid as you used to be.”

I think Sid was worried that I wasn’t going to be tough enough.

Who was right? Jack or Sid?

The CEO of a company I joined after I left Maxim was, to put mildly, a little different than Jack. This particular CEO was unique.

I was running one of three divisions in this company. The division, when I took it over, was in free-fall. The division’s revenue had dropped from $100M/Year to less then $10M/Year.

I quickly learned what the problems were, and I knew how to get the division moving in the right direction. I set up a meeting with the CEO, so I could tell him how we were going to fix the division.

I was really excited about presenting to the CEO because the problems I had uncovered were simple and easy to solve. And you want simple problems, not complex problems, because they are easier to fix.

So, I began my presentation to the CEO and told him about the first problem and how to solve it.

I told the CEO about the second problem and how to solve it.

I told the CEO about the third problem and how to solve it.

I thought to myself, “What’s with this guy?” I didn’t know if the CEO liked my plan or not.

Then, I got my answer.

I finished my presentation and the CEO said to me, “I never want to hear another presentation like that again!” The CEO then walked out of the room and slammed the door behind him.

I learned my lesson: The CEO was close-minded. I would have to solve and fix the division’s problems without telling him.

The close-minded mindset of this CEO is not an effective mindset. 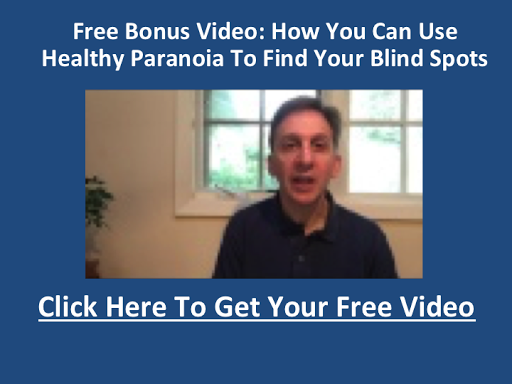 The CEO really didn’t want to hear anyone else’s views.

It was his way and only his way. No dissenting opinions were allowed. Or, at least, he didn’t want to hear about them. Eventually, the CEO was forced him to sell his company.

You have massive blind spots when you do not allow your team to tell you about the problems.

Let me contrast Jack Gifford’s mindset to that of the Pollyanna CEO who didn’t want to hear any dissenting views. Gifford would get pissed if you didn’t present the problems a business had to him.

In fact, Gifford would assume you were hiding something from him if you didn’t present the businesses problems. He would probe and ask questions until he was satisfied he knew the dynamics of the business.

The reality is you need to have a healthy paranoia when you’re running a business.

In other words, you need to be paranoid enough, so you don’t overlook things. That’s how you find your blind spots. However, you can’t be so paranoid that you drive everyone crazy.

Here are three techniques about developing healthy paranoia that I like using:

A.  Don’t get complacent. Let’s say things are going really well and your business is growing.

It’s time to relax, right? Wrong! You are at your most vulnerable when things are going well.

B.  Trust your instincts. There’s a reason something is bothering you. It’s because something is likely wrong.

So trust your instincts, and then…

C.  Marry the data to your gut. Keep digging until your gut and the data match. This is the final piece of the puzzle.

Your natural tendency is to make the data match your instincts. You want to do the opposite.

The right mindset of a startup CEO: Always be looking for your blind spots.

Are you looking at different points of view?

Are you encouraging different points of view?

It’s only your opinion when you’re close-minded. You’re not taking into account the knowledge that other people in the company have.

So what are you going to do?

You want to open-minded. What do the other people in the company see that you don’t? What are their views?

You want to get the views of your team before making a decision. And, if you are truly open-minded, then members of your team are likely to point out something you missed.

So the thought process should be it’s not just you, it’s everyone.

You’ve hired really good people and you’re open-minded. You have a healthy paranoia about what can possible hurt your company, then you add in a little bit of focus too, because you need focus. That’s a recipe for a successful CEO mindset.

You’re leading a group of people (your team). And your team has to want to follow you. Having a clear vision that your team buys into will go a long way towards getting people to follow you.

The winning combination: healthy paranoia, a vision, and a great team.

Maxim grew to be a $1B/year company under Gifford’s leadership. The company with the Pollyanna CEO grew to a much smaller number.

Gifford built a great team around him. Gifford had a clear vision, and dissenting views were encouraged.

You should do the same.   Have a vision to attract great people and then encourage dissenting views to eliminate your blind spots.