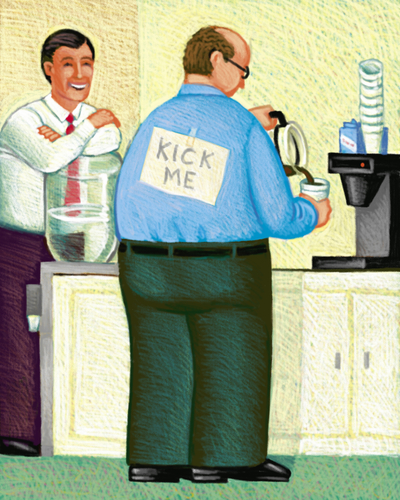 Let me start with the most controversial thing I shouldn’t of wasted my time on, and that was hiring a Vice President of Sales. Not only did I have a founder VP of Sales not work out, I repeated my mistake TWICE more!

I hired an executive search firm to help me find a great VP Sales.  The candidates, to say the least, left a lot to be desired..

I'll never forget meeting with this one candidate who told me he was "Coin operated."  Yes, I did pass on him, but you get the point.  The quality was just not at the level we needed.

So just don’t bother wasting your time on spending any time recruiting a VP of Sales until you have a repeatable sales process and your probably at least past $1M/Year in revenue.

But the madness of things you can waste your time on doesn’t stop with hiring a VP of Sales. There’s a long list of things you might think are important, but aren’t. Here’s the rest of my list:

A. You shouldn't Waste time worrying about equity ownership percentages and dilution

This maybe another controversial one, but stop wasting your time worrying about how much equity you own. There’s no market for your equity, so today it’s worth nothing.

The only way to make it worth something is for you and your team to kick ass. So stop wasting your time or doing the math on what your equity is worth. It’s a waste of time.

And while we’re on the subject of equity….

B.  You shouldn't waste time worrying about keeping control of the voting rights

Yes, you want to own the majority of the company if you can, but it’s not going to help you stay CEO unless you do a great job. The reason is that until you are cash flow positive you need investors.

And, even if you own more than 50% of the company, the investors can demand you resign if you’re not doing a good job because they can withhold funding. Look at what happen at Uber if you’re in doubt.

Repeat after me, your company’s exit will take care of itself if you execute. So focus on your team executing flawlessly and you wont have to worry about the exit.

D.  Don’t waste your time on a press release announcing you’ve been funded

The PR you get will do you any good because the shelf life, or the boost to your web traffic, will be gone in a couple of days.

It’s better to save your money on other important things.

Schwag is a waste of money. Allegedly, schwag is one of those things you’re supposed to provide your new employees to look cool and build esprit de corps.

Schwag will not make you look cool. Schwag will not help your culture. Hiring a great team and helping that great team execute will do more than any schwag will ever do. (For more on schwag, read: www.brettjfox.com/is-giving-schwag-to-your-employees-a-bad-idea/)

Here’s another thing you shouldn’t waste your time on…

You can get really nice office furniture for pennies on the dollar by buying the full cost furniture of the failed startups that came before you.

Our cubicles didn’t match. So what. The cubicles were nice and everyone was happy.

More importantly, you set a tone of frugality for the rest of the company.

Speaking of really crazy things to waste your time on…

G.  You shouldn't waste your time with silly sick policies

That’s it. That’s all you need to do because an employee that abuses your sick policy will no longer be an employee.

H.  You shouldn't buy things you don’t yet need

I already talked about not buying expensive furniture. But, in the same thought process, just don’t software or hardware you don’t absolutely have to have.

For example, two of my cofounders were pushing me to spend $300,000 on an ERP (Enterprise Resource Planning) system when we could use Excel and Quickbooks to do the same thing. Yes, the ERP system would have made life easier, but not $300,000 easier. We passed.

It’s the same frugal thought process I spoke about earlier. Plus, you never know exactly how much runway you’re going to need.

And don’t waste your time and money on…

I.  Hiring people you don’t yet need

Your team is likely to be your biggest resource when you’re starting out. And, if you’re not careful, you can find yourself burning a lot more runway than you want if you hire way above your plan.

Hire the people you need, not the people you’d like to have. The one thing you never want to do is lay good people off because you hired them ahead of plan. The pain you will cause these people will be on your conscience forever.

J.  Hiring a COO when barely have any people

Of all the things you don’t need when you’re starting out (and you will likely never need), don’t waste your time recruiting a COO. Startups don’t need a COO because you, the CEO, need to be hands on to run your company.

The COO title is all about the ego of the COO. There is no need for a COO for many, many years. Your money can be used on much better things than a COO.

And, stop wasting your time…

K.  Trying to save your cofounder that isn’t working out

Startups are hard. And many founders don’t understand how truly hard they are. I’ve learned that trying to save someone from quitting is usually a fools errand.

Instead, focus on finding a replacement for your cofounder and negotiating a fair settlement for your departing cofounder. (For more on how to handle a cofounder leaving, read: www.brettjfox.com/what-are-the-eleven-steps-you-can-take-when-a-co-founder-quits/)

And don’t waste your time…

L.  On recreating the wheel

It’s normal for you to have your own spin on how to be a CEO. That’s normal. But don’t fall into the trap of changing everything.

Save your creativity for the product you’re bringing to market. There are perfectly good ways of doing things like the sick policy I mentioned above that you can just reuse.

Oh, and don’t waste your time on…

Spending money on a 409A to get a valuation of your company is a waste of money. Why? You’ll find that 409A valuations are just not very accurate.

Worse yet, you want your common stock to be valued low when you’re starting out. And the 409A valuation you just wasted your money on might come back with a higher valuation than you want. Now your employees are pissed because it’s going to cost more to exercise their stock.

Just set the value of your common stock at a normal value like $0.12 per share. You’ll save yourself a lot of angst by doing so.

N.  Wasting time worrying about what your competitors are doing

How many times have we read a question in Quora about someone wondering if they change strategies because a “better funded competitor” has entered their space?

Face your problems dead on. For example, I knew one of my cofounders (Randy, not his real name) wasn’t going to work out.

I knew for months I was going to have to fire Randy. But I hoped things would get better.

Of course things didn’t get better. And I finally fired Randy.

The team was relieved when I did fire Randy. They said, “What took you so long.”

So there you have it. My list of sixteen things you shouldn’t waste your time on when you’re starting your company. Try avoiding as many of these mistakes as you can.