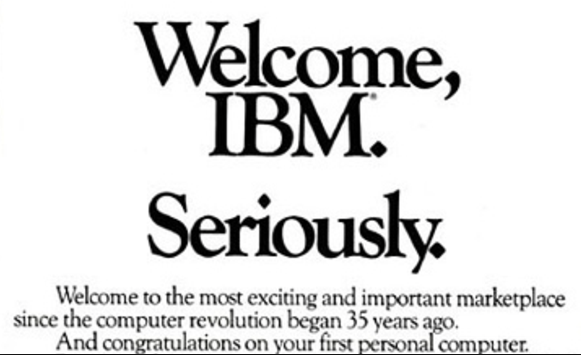 That was Steve Jobs’ famous response when IBM entered the PC market in 1981. Maybe Jobs should have been more worried.

The question of “What if Facebook/Google/IBM/Texas Instruments/Intel/(name your tech behemoth here) enters our market?” has been around forever. And it’s a favorite question for investors to ask when you’re raising money.

Investors already know that almost nothing (except bulletproof patent protection, and that's rare) stops any company in any industry from implementing the same new feature/product/service that you just implemented. They also know that small companies (startups) have many advantages versus their larger competitors.

I used to get asked a variation of this question (in my case it was, "What if Texas Instruments or Maxim or Analog Devices or Linear Technology come after you?") when I was raising money.  The answer was always the same.

"Nothing is going to stop them.  It will take their best people to do what we are doing.

“However, we have a huge advantage versus them: our lives depend on it.  To them, this is just another product line.  So we are going to fight and kick the shit out of them.  Here's how….”

And that's exactly what happened.  We were focused and we executed at a really high level.  And we cared about every potential deal.  Our established competition cared, but at nowhere near the same level we did.

Your competitors do have great people. Sometimes, they may even have better people than you do. So, when you are thinking about what market to enter, you need to be strategic because:

Market Choice Is Everything!

I’ll never forget years ago when I was an EIR (Entrepreneur in Residence) for a VC firm located in San Francisco. It was Monday, which was the day that companies would present to the whole partnership.

On this particular Monday, a very charismatic CEO with a great pedigree was pitching the partnership. His company had invented a better product aimed right at the heart of a major semiconductor company’s business.

It looked like the firm was going to invest.* (I’ll get back to this later)

The interesting thing to me is I saw this play out early in my career when I was with the young upstart company (Maxim) attacking the established companies (National Semiconductor, Analog Devices, and Texas Instruments).  We cared more than the other guys did and we won.

The way to defeat the larger competitor is to not let them gain any headway in your market.  Then, they'll go back to focusing on what they do best.

On the other hand…

As Maxim grew in size, the company started entering new markets dominated by smaller, nimbler competitors. For example, I was running a division of Maxim that was focused on the communications space during the late 1990’s.

I got it completely backwards.

Analog Devices never became the threat I expected them to be. We had superior products than AMCC and Vitesse and we offered our products at a lower price, but we couldn’t unseat them.

Communications was the only business AMCC and Vitesse had. They fought like their lives depended upon it (because their lives did depend upon it). It was just another product line to us.

Don’t underestimate the power of focus!

Small companies have a massive advantage versus big companies: the small company is laser-focused on one goal. The big company will inevitably be focused on many goals.

Small companies usually move super-quickly because they are not bogged down with politics. Big companies, where many senior and mid-level managers are primarily concerned with protecting their turf, tend to move at a much slower pace.

Then, most companies evolve to this: 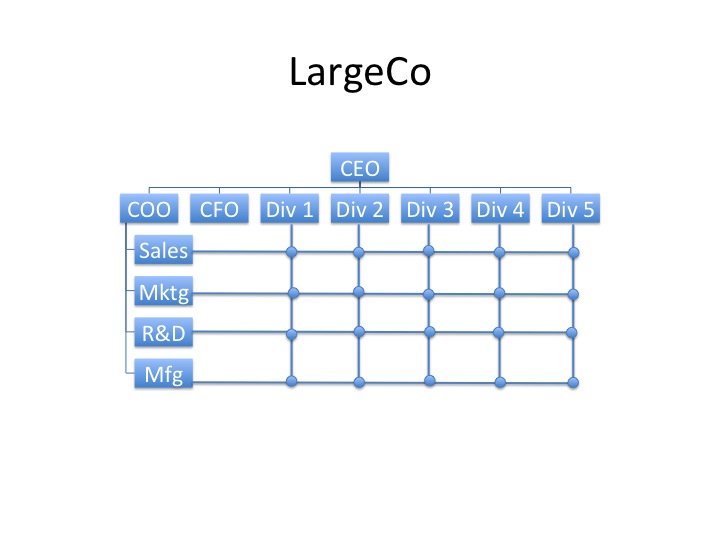 You can almost be guaranteed that 80% of LargeCo’s revenue is coming from one of its five divisions. Where do you think the centralized sales organization is going to focus to meet its goals?

And therein lies the opportunity for your startup. You can focus on the soft underbelly and win. You’re 110% focused on your area, and they are not.

Can you win going after the largest segment of the market?

Sure you can. However, this takes a lot better execution. You’re going to have to be 100X better than your competitors and you’re going to need a huge amount of luck.

You’ll need luck going after the soft underbelly too, but a lot less luck.

Success in business is hard enough, so my view is make things as easy as possible for yourself.

What happened with the VC firm’s investment with the charismatic CEO?

I was impressed with the CEO too. The guy really knew what he was doing. However, I had a concern I raised to the partners:

“He’s trying to steal their (his competitor’s) lunch. He’s targeting 80% of their existing business, and they are going to throw all their resources against him to prevent it.” I recommended that we pass on the investment.

I was shouted down.

The firm made the investment, and $100M and several years later, the company was liquidated for pennies on the dollar.

Do You Want To Grow Your Business?  Maybe I Can Help.    Click Here.