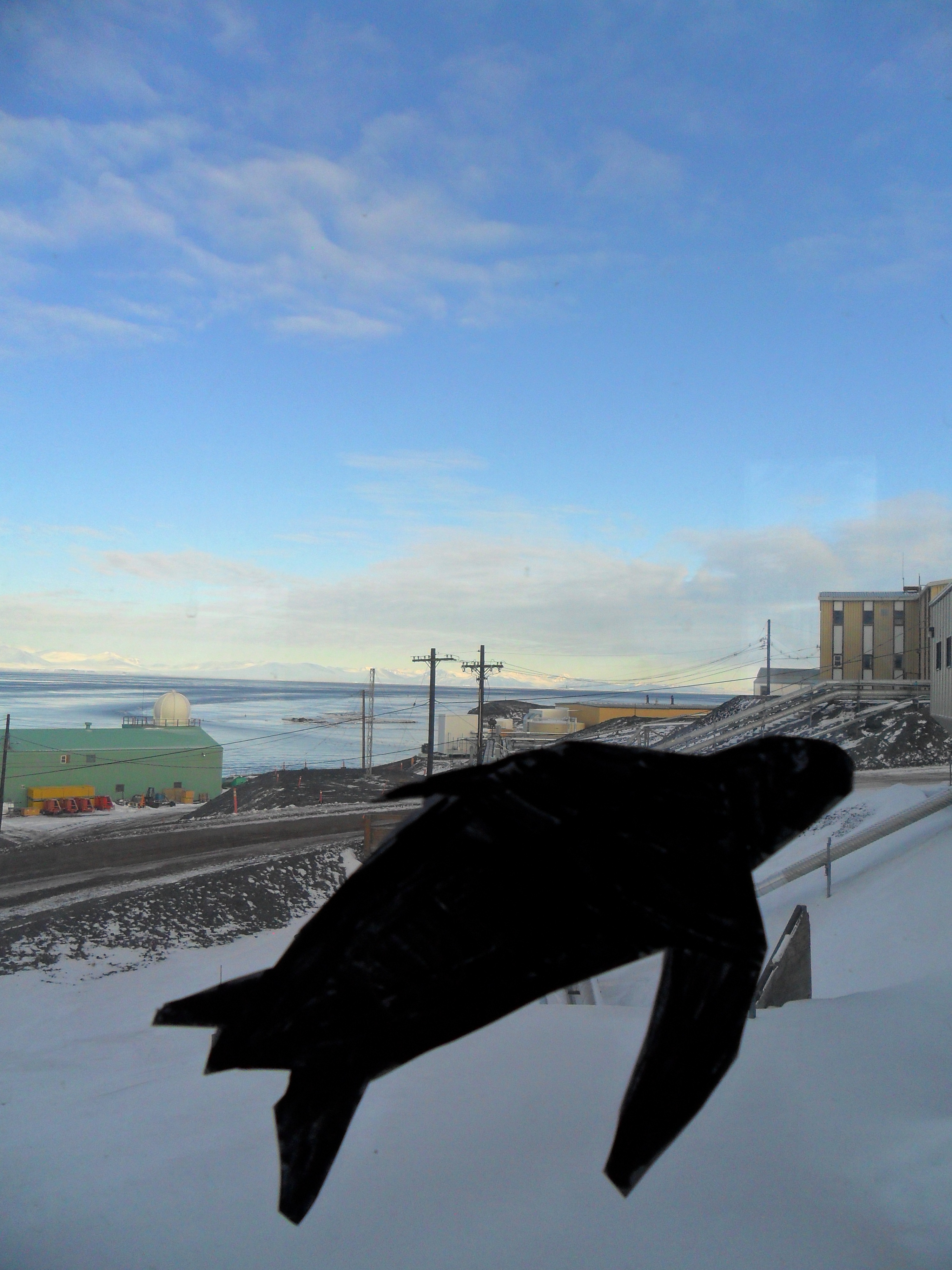 My daughter Avery had an assignment in her first grade class. She was supposed to see if she could send a paper turtle to every continent in the world.

The first challenge what was Avery going to name her nomadic turtle? Avery was into eating goldfish at the time, so the turtle became known as Goldie.

Blossom and I started seeing whom we knew that could help Avery send Goldie around the world. Blossom’s godmother lived in Sweden, so Europe was easy.

We knew someone in Peru, so check off South America. Asia? That was easy too. We also had friends in Africa. Australia? We had that covered as well.

We thought getting six of seven continents was pretty good for Goldie. “Daddy, I need to find a way to get Goldie to Antarctica,” Avery said to me.

Avery started giving me the look with her big brown eyes.

That’s when I remembered that Martin, a brilliant engineer I had worked with years ago, had worked in Antarctica. Perhaps he knew someone?

So, I contacted Martin. Sure enough, Martin knew that Jen, a “winter-over” (that means you are spending the winter in Antarctica) was stationed in Antarctica right now!

Martin introduced us to Jen, and Jen was happy to help Avery. Goldie could now visit all seven continents!

Goldie opened the door for Martin and I to discuss working together.

Martin asked me what I was up to, so I told him that my company had just received funding about a year ago. Well, one thing led to another, and Martin asked if he could help us.

I was thrilled because Martin is one of the most talented engineers I know.

However, there were two problems:

The good news was Martin had a fully functioning lab at home, so he could work remotely.

You increase your chances of success with a remote team when you already have a relationship with some of the team.

I decided to take the risk with Martin because we had a long relationship. I felt that any time we get from Martin would be good. Plus, I secretly hoped Martin would become so excited about what we were doing that he would eventually join us full time.

Martin began working with us two days per week. Martin was working his ass off. He was charging us for two days work, but I knew he was working a long two days.

Now I had an advantage going in with Martin because we had known each other a long time. I knew Martin was likely going to work hard. However, it brought me great comfort when I saw how hard Martin was working.

I knew we were getting his best.

Martin became a full time employee within one year.

I never pressured Martin to join us full time. It just naturally progressed.

Martin asked, “Is there any way I can keep working with you?”

The timing couldn’t have been worse for us. Martin was defining the most important product in our new product pipeline.

Could Martin and the design engineer stay joined at the hip even though they were going to be separated by two continents?

And now, Martin was going to have to do all these things effectively from four time zones and a continent away.

A few months later Martin, his wife, and their young son went to Uruguay.

You know the old saying about, “Absence makes the heart grow fonder.” Well, one of our investors had another saying, “Keep your supply lines short.”

What did he mean by keeping your supply lines short?

The investor meant you take on more risk when you have a remote team. And you are going to have to compensate for the risk of having a remote team.

You compensate for the risk by over-communicating.

You and your team at headquarters are going to have to:

Managers are going to have to spend more of their time then they would managing a local team. That’s the hidden cost with remote teams.

But the real burden falls on remote employees.

Martin, to his credit, understood that he was going to have to take on the extra burden. Martin bent over backwards over-communicating with everyone. He made himself available whenever and wherever he needed.

The product Martin defined became the best selling product in the company’s history. Revenue was over $5M/year.

We got lucky with Martin. There is no question about it. Martin and I had a history, so this really helped. But, there are takeaways for you too:

A.  Remote employees need to be self-starters.

B.  You will need to over-communicate with your remote team.

You will need to make yourself available at times outside of normal work hours.

And you will need to spend more time communicating with your remote team than your local team. Your extra effort is a prerequisite for having a successful local team. With all that being said…

Your supply lines will be longer with a remote team, but you can still successfully manage remote teams.

How Do You Manage A Remote Workforce During COVID-19?

Here are a few more things you'll need to do:

A.  Update your team every day.

Your team is scared.  Hearing from you every day will help.  You can just send a daily email to your remote team.

B.  Have a weekly update all hands videoconference.

Just keep reiterating the message of what's going on.  And answer every question your team has.

C.  Videotape the meetings for team members that can't make it because of time-zone issues.

You can also adjust the time of the meeting accommodate your team.

Do You Want To Grow Your Business?  Maybe I can help?  Click Here.