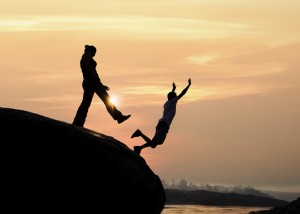 I was driving one beautiful Bay Area summer morning. The temperature was a perfect 65 degrees. There wasn’t a cloud in the sky, yet there was a storm on the horizon.

Just then, my cellphone rang. It was Leon calling.

“Are you driving?” Leon asked ominously.

“I think you should pull over.”

I didn’t. I sensed what was coming.

A little backstory is appropriate here.

I joined a venture capital firm a few months earlier as an Entrepreneur in Residence (EIR). VC firms will bring people like me on board, as an EIR, with the hope that they will incubate a company. The VC firm gets first dibs on investing, and, as an entrepreneur, you have an investor all lined up ready to invest.

And that’s exactly what I did: incubate a company.

I knew exactly what I needed to do, and I set about recruiting a top-notch team. The first person I added was Leon.

Leon and I had worked together years ago, so he was a known quantity. Still, I checked with my old boss, Ziya, because Leon had worked for Ziya. Ziya thought Leon would be great, and so did I.

Leon suggested we talk to Peter. Peter worked with Leon, and Leon thought he would be great.

The three of us met for lunch at Buck’s in Woodside. Buck’s is an institution in the Silicon Valley, and it was crowded and very loud as usual.

I really don’t care for Buck’s, truth be told. Yes, it is conveniently located near Sand Hill Road, but the food is just not that good.

I had a rubbery chicken salad of some sort. I don’t remember what Leon and Peter had.

More important than the food, Peter and I got along well. Plus, I thought we shared the same vision for the company.

Peter, Leon, and I spent some more time together before we added Peter to the team. I checked with several people that knew Peter, and the consensus was clear:

Peter is a guru! You will hit a home run if you can make him part of the team!

I decided to go forward and add Peter to the team as our VP of Engineering.

We started the laborious process of raising money with the pitch complete. We had the money lined up, but problems started popping up.

I started pushing Peter to line up design engineers in expectation of our launch.

A week later, I asked again.

“Once the money is in the bank.

“By the way, I think we should raise less money…”

The conflicts between Peter and I continued.

Back to my conversation with Leon…

I didn’t pull the car over as Leon requested because I knew what was coming.

“Brett, I am resigning.”

Peter manipulated Leon into quitting. Why? Does it really matter? You only want people that want to be there. There was no reason to try and keep him.

My next call was to Peter. I’ll never forget what he said:

Leon sent an email to the partner at the VC firm I was working with. The partner shared it with me:

“…The business concept is very good and will be very successful with the right leadership and team.”

Leon and Peter’s strategy was clear: steal my plan and try and raise money without me.

Leon and Peter assumed I would be dead without them, roadkill waiting to swept-up by vector control.

I was bummed in the moment. What was I going to do?

I didn’t feel it at the time, but Leon and Peter did me the biggest favor in the world by leaving. Why? More on that later.

I reconstituted the team with better people that were more aligned with my vision.

I started raising money with the new team in tow.

At the same time, I began hearing rumblings that Leon and Peter were also raising money.

A VC friend of mine showed me the slide deck they were using: The bastards were using my original slide deck!

We lost a couple potential investors because Leon and Peter were trying to raise money at the same time as us. However, we persevered.

Despite the Great Recession, and despite Leon and Peter, we were able to close our funding.

To Leon and Peter, all I have to say is:

It really doesn’t matter, does it?

I was able to pursue my vision, and bring on a team that I was more closely aligned with. A passionate team. A team that was willing to sacrifice.   A team that spilled their blood to win.

Thanks again for quitting.

We couldn’t have done it without you,