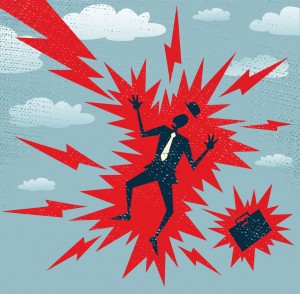 It was the summer of 2009, and we were closing in on our Series A funding. I wanted to update my fellow co-founders on our progress, so I scheduled a meeting at the local Starbucks.

A little bit off topic, but Starbucks is a great meeting venue for an unfunded company with no office space. So is Peets, by the way. You get a nice environment with beverages and a bathroom. What more can you ask for…

Four of the five founders were on time for our 11AM meeting. We were waiting on our Chief Technology Officer, Raphael.

11:10AM. Out of the corner of my eye I say Raphael walking through the parking lot. He looked like a geeky gunslinger dressed all in black.

We had been raising money since January 2008. We had survived the nuclear winter of the Great Recession. The fund raising had been exhausting. Everyone’s patience, and belief in the company, was tested.

Raphael opened the doors to Starbucks abruptly and sat down at our table.

Before I could update the team, Raphael started talking.

“So”, Raphael said in his thick accent, “DO WE HAVE A TERM SHEET OR NOT!”

You could feel his anger push everyone back from the table.

“We are getting close,” I responded.

“CLOSE IS NOT GOOD ENOUGH! I AM TIRED OF WAITING. THIS IS GOING NOWHERE!”

“This is how it works,” I said. “We are making really good progress. We…”

With that, Raphael walked out of Starbucks.

I went on with the meeting and updated the rest of the team. One of the other co-founders asked me, “What are we going to do about Raphael?”

“Let me think about it,” I answered.

We concluded the meeting, and I thought about what we were going to do about Raphael.

Raphael is a brilliant engineer. Could we live with Raphael’s “eccentricities” because of his skills?

I realized the answer was obvious. In fact, the decision was crystal clear.

A couple months later we were closing our funding, and I met with Raphael and our VP of Engineering. This time we met at Peets.

Raphael was again about 10 minutes late.

Raphael walked through the door of Peets again wearing all black.

Raphael sat down at our table, and I began speaking.

“We’re closing our funding next week as you know. I’ve decided we are going to go forward without you.

“I am giving you a check, buying back your shares for $100.” I had checked with our attorney, and she felt giving him a check was the cleanest way for us to go forward.

The three of us shook hands, and he walked out of Peets.

I felt the weight of the world lifting from my shoulders. We didn’t have to deal with a toxic coworker anymore.

The only question I had was, “why did I wait so long?”

I had tried to see if we could make it work. I had talked to Raphael, and things got better.

Then they got worse again. So I spent more time with Raphael.

Things got better, and then they got worse again.

I am sure you have all seen this pattern sometime in your career.

The meeting at Starbucks was my “enough” point. I kept thinking to myself, “What is Raphael going to be like in a real work crisis?”

The answer was simple: Raphael will be a cancer.

Start-ups are fragile by their very nature. You are fighting an uphill battle with less resources then your competitors.

You can’t afford to have a Raphael during the tough times.

And I knew we would have tough times.

The lesson for any manager at any level is to fix the problem when things are going well. Don’t be afraid of taking action because you fear losing the person’s supposed skill. You will not miss it. Trust me.

“OK. That’s easy for you to say. You are the CEO. I’m just a co-worker stuck with a toxic co-worker. What should I do?”

Great question, and you have my sympathies.

It sucks having a toxic co-worker, and the solution may not be pleasant.

Let’s start with reality. We all are going to have to deal with toxic co-workers from time to time in our career.

I can’t say I was 100% successful with any of these strategies, but here is a step by step way to deal with a toxic co-worker:

Once you get your toxic co-worker fixed or out of your life, you will feel the weight of the world off your shoulders.

Just like I did with Raphael and all the Raphael’s that came after.