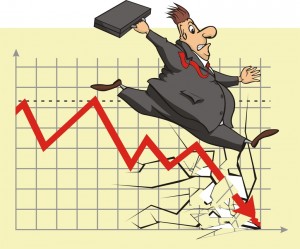 Here's a story about one of the co-founders of my company.

Dan (not his real name) came with great credentials. He was smart and he had accomplished a lot. His was a name that investors would respect. Dan was also independently wealthy.

Dan joined the company during our Series A fundraising. Dan was such an impressive person that I introduced him to all our prospective investors. Dan made a difference just as I thought he would.

Investors were impressed with Dan. His background, pedigree, and gravitas made – no, forced – people to listen.

We had a great team without Dan. With him, we had an unbeatable team.

Dan started out as a great partner. His experience was in different areas then mine, so, between the two of us, we covered a lot of ground.

I was ecstatic. Not only was Dan going to get us over-the-top on fund-raising, he was going to help us win operationally.

There was one more thing about Dan: he was unbelievably paranoid about being screwed over.

On and on it went. The questions seemed reasonable, but his paranoid delivery conveyed a different message: Dan was going to be impossible to work with.

Nothing wrong with that, is there? Of course there isn’t.

Each passing day, as Dan’s paranoia grew, my concerns grew. I didn’t want to fire Dan, so I did what I could to help Dan contribute.

The problem was we really didn’t need Dan’s expertise. We were a start-up, literally just starting up operations. Everyone needed to be hands-on. Dan, even though he was employee number seven at one of the most successful companies in our industry, just couldn’t translate to a small company environment.

Dan had a choice: become hands-on in his area of greatest expertise or dabble in many areas outside his expertise. Dan chose dabbling.

I called our board members to let them know that, despite Dan’s impressive skills and ability, I was going to fire him because he was too disruptive.

The board was not surprised.

The bottom line is don't be Dan.

Back to the question...

Can you prevent yourself from being screwed over in business?

There is always a way to screw someone over, so there's always a risk that that's going to happen to you. The smartest thing you can do is work with people you trust. That is your best defense.

I know it’s tough to not let your past influence how you act, but you need to. Not for your teammates, but for yourself.

Are you wondering what happened to Dan? He landed at a larger, public company as a senior executive. He’s working with people he’s worked with before in a bigger sandbox. I am glad it worked out for Dan.