How rare is our air?

What if I told you there have been only two periods since 1871 when stocks have been valued this high: 1929 and 2000? We know how those stories ended…

Well, depending upon whether you use the Case-Shiller CAPE ratio or my own Overvalued/Undervalued Index (OU Index for short), maybe 2-4% of the time has the stock market been this high.

The odds are the stock market will correct soon.

The answer: no one knows.

But I know numbers. And I know probability theory.

And the probability is in favor of a correction.

Now, 144 years is a helluva lot of data by any person’s standards. It makes the 16 years of data I have for the OU Index appear like a mere drop in the bucket. I guess I will need 100 years or so of data for the OU Index to be taken seriously.

Here is how the CAPE ratio breaks down by percentages: 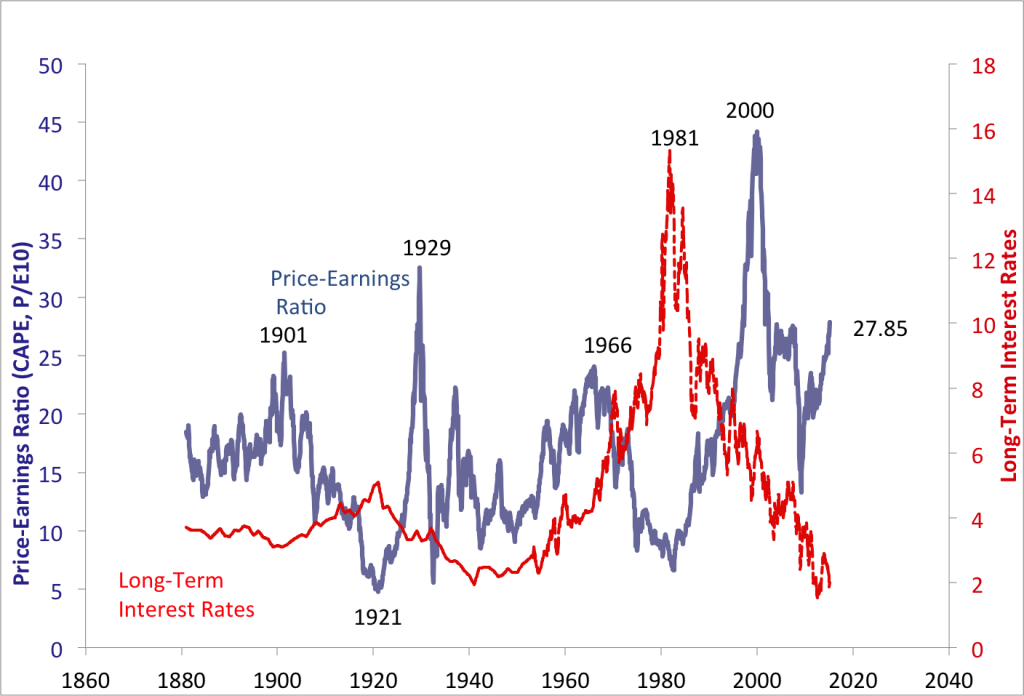 Let’s look closer at the times the CAPE was higher then 27.85.   They are broken into three chronological blocks:

Robert Shiller only won the Nobel Prize in Economics in 2013 for his work. Maybe that’s not enough to convince you.

How About My Overvalued/Undervalued Index?

The Overvalued/Undervalued index places stocks into three buckets and assigns a numerical value of 1, 0, or -1 to the stock depending upon the bucket. A company’s 10-year growth rate versus the company’s trailing P/E ratio determines the rating:

The data consists of:

Here’s the data on the OU Index:

I know what some of you are thinking. “It’s different this time”.

I am not buying it.

You don’t want believe me.

Well, do you believe prominent venture capitalist Bill Gurley, an investor in Snapchat and Uber, among other notable startups? Gurley has been concerned about a bubble since 2014.

Gurley, speaking about his fellow VCs, said, “There is no fear out there,” at the SXSW conference in March 2015.

You say, “Who cares? It only affects startups.” No, it will not.

The economy is interconnected.

Let’s revisit my neighbors. I had breakfast with my neighbor a couple of weeks ago.   He and his wife are empty nesters. They have decided, after 18 years, to downsize. He put his house on the market the week prior.

I asked him how the open house went.

My neighbor was wrong. My neighbor ended up selling his home, in an all-cash deal, for 35% over the asking price.

There are stories like my neighbor’s all over the Bay Area.

Now The Excesses of the Silicon Valley are Beginning to Show up Elsewhere.

I read an amazing article over the weekend. All I could think when I read it was this is going to end badly.

The article detailed how newly minted Silicon Valley millionaires are buying second homes in Los Angeles. They are spending weekends in LA for the warmer climate and commuting to the Bay Area during the week.

So, now the LA area real estate market is effected by the tech bubble. Those second homes will be the first to be sold, at a discount, when someone needs cash.

There have been nine stock market corrections of 30% or more since 1900!

I did a little research just for fun. The Dow has fallen over 30% nine times since 1900. That’s almost one 30% correction every 10 years:

Okay, I believe you. There is a bubble. What should I do?

Here are the questions I ask myself:

Your answers to these three questions should give you a really good idea of what to do now before the stock market bubble bursts.

Here’s what I am doing:

Why is it so important to sell or rebalance your portfolio before the correction?

Remember, it takes 6 years, on average, for the market to correct.

In every speculative bubble that ever happened, some “expert” said, “It’s different this time.”

This bubble will be no different.

What is the date of the ?. No one knows.