“Brett, you look like you’re a million miles away,” Randy (not his real name) said to me.

Randy was right. I wasn’t focused at all on him. I was waiting for Tina to come into my office.

You see, this wasn’t a normal meeting. It was a meeting to terminate Randy. And Tina was there to witness the termination.

Finally, Tina came into my office.

My heart rate shot way up. I let Randy know we were terminating his employment.

I ended my comments with, “I’m sorry.”

Tina ushered Randy into her office.

Why? Randy was, to put it mildly, a handful to work with. There were too many complaints from too many people.

Too many people were quietly miserable. They weren’t complaining, but you could see the frustration written on their faces.

I had a choice to make: keep a very talented senior member of the team and let everyone in the company just deal with him or terminate him.

I chose to terminate Randy because I felt, as talented as he was, the interpersonal problems would hurt the company if I just let things stay the same.

The reality is Randy didn’t fit with the team and the culture the company was building.

One of the most overlooked areas of running a successful business or managing a team is the culture.

When everything is going great, culture doesn’t matter. Look out below when things are going bad. That’s when company culture matters.

And believe me, every company goes through bad times. Your survival and your company’s survival might depend upon the team you built.

My company was going through a very difficult time raising money. We had a term sheet, but our investors wanted another new investor (in addition to the one we had) to join the syndicate.

We had a board meeting and our investors decided to shut the company down.

Their decision took me by surprise. I suggested to the board that we put the employees on minimum wage for the next six weeks, so we could get a commitment from at least one of the four potential investors.

The tough part was telling the employees.

I didn’t know how they would react.

Would they get mad?

Would they quit en masse?

I didn’t know what would happen.

We had a company meeting the day after the board meeting like we always did.

I told the employees we had no choice but going to minimum wage to save the company.

I answered questions until there were no more questions to be answered. I thanked the employees for their support at the end of the meeting.

I still didn’t know what type of response the employees would have.

As the meeting ended, they responded. The employees applauded – all of them.

I have never been so proud of a group of people as I was that day.

Yet I was still worried about losing our best employees.

We didn’t lose a single one, and three of the four investors eventually committed to investing.

I believe the reason the employees didn’t quit was in large part due to the quality of the people we hired.

How do you create a cohesive company culture?

Should you hire the genius jerk that might save the company? 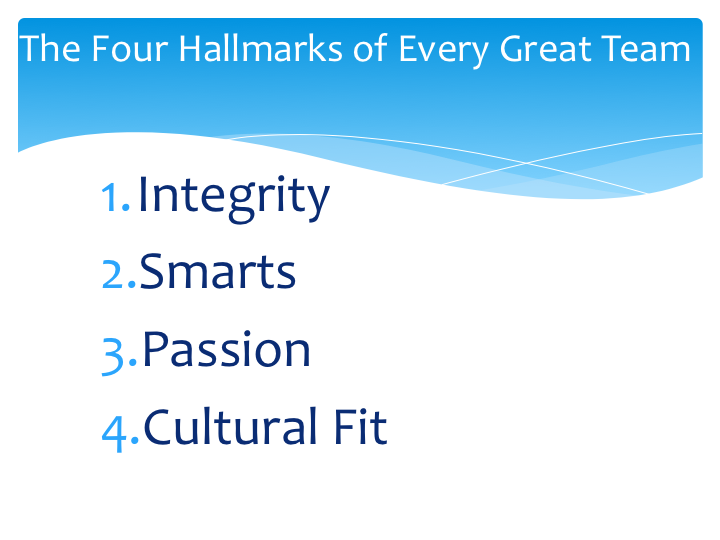 It starts at with the people you hire.

The leader sets the culture for the company, division, or group. There's an old saying: the fish stinks from the head down. Simply put, a bad leader sets a bad culture, and a good leader sets a good culture.

A leader can have whatever culture he or she wants in mind. However, it is the people the leader surrounds herself or himself with that determines the culture.

In other words, you cannot just decree a culture. You hire (and fire) a culture.

A.  Integrity. Need we go any further? Why would you ever hire someone if they don’t have integrity? Actually, I think we do need to go a little further.

Everyone – everyone – is occasionally faced with the dilemma that arises when you’re interviewing a clearly talented individual who seems a bit ethically iffy. Don’t hire them. Ever. No amount of ability makes up for a lack of integrity.

B.  Smart. We want people that are very smart. Who doesn’t, right? Well, it’s surprising how often I see people who only hire those who clearly aren’t as smart as they are.

Don’t be intimidated by those who might have something you don’t. Be grateful you can add them to your team.

When I interview, I always look for people who are committed enough to my cause to have done their research and found out as much as possible about my company.

D.  Company fit. People frequently overlook the importance of cultural fit. Desiring cultural fit does not mean that we want people that are clones of each other.

Diversity is vital, but diverse employees better mesh well with each other. Throw a bunch of diverse ingredients that don’t go together into a pot, and you have a horrible meal. Throw the right stuff into that pot, and you’ve got gourmet cuisine. Aim for a five-star group of employees.

What if you inherit a team or have a new leader?

Evaluate everyone based on the simple four part criteria above:

Look for the same things (Integrity, smarts, passion, and company fit) if you are joining a new team.

One big word of caution:

Remember that, when you interview, every candidate is trying to impress you, so everyone (except for the truly negative) will be on their best behavior. The great employees to build around may not reveal themselves for a long time.

Consistency is the key.

Years ago, I took over the division a company that was in need of a complete overhaul. Many of the initial team I inherited worked hard during the initial transition period.

It was only several months into the turnaround that the great teammates became clear:

Everyone should experience once in their career what it is like to work with a great team. You will never accept working in any other environment once you do.

Is Your Business Stuck?  Maybe I Can Help.  Click Here.